Q: What is the difference between death and taxes?
A: Congress does meet every year to make death worse.

"When making out your tax return, it's better to give than to receive."

"Science has increased our life span considerably. Now we can look forward
to paying our taxes at least ten years longer."

The local bar was so sure that it's bartender was the strongest man around that they offered a standing $1,000 bet. The
The bartender would squeeze a lemon until all the juice ran into a glass, and then hand the rest of the lemon over.

Anyone who could squeeze one more drop of juice out would win the money.

Many people had tried over time (weightlifters, longshoremen, etc.) but nobody could do it.

One this scrawny little man came in, wearing thick glasses and a polyester suit, and said in a tiny, squeaky voice, "I'd like
to try the bet.: After the laughter had died down, the bartender said OK, grabbed a lemon, and squeezed away. Then he
handed the wrinkled remains of the rind to the little man.

But the crowd's laughter turned to total silence as the man clenched his fist around the lemon and six drops fell into the glass.
As the crowd cheered, the bartender paid the $1,000, and asked the little man, "What do your do for a living?"

The man replied, "I work for the IRS."

Did you ever notice? When you put the 2 words "THE" and "IRS" together it spells: "THEIRS."

If the IRS gave green stamps, thousands of Americans would look forward to paying their income taxes.

It's strange how a person with no sense of humor can come up with such funny answers on his/her tax return.

"Golf is kind of like taxes, son. You drive for the green and your end up in the hole." 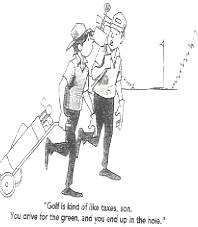 Back to Fox Tax Page