What's In a Name?

According to Sketches of Burke County by Cordelia Camp, "the little town five miles west of Morganton …
reaches an elevation of 1,315 feet, the highest point of the railroad in Burke County." In 1868 the Southern
Railroad was built through what is now Glen Alpine. By 1876, the little town consisted of "only two white
families and one Negro."
Men on the railroad called it Turkey Tail because of a tree next to the railroad tracks that had the shape
of a turkey tail. J.D. Pitts set up a planing mill at this spot at the same time Columbus and Edmund Sigmun
began operating a post office and store in 1876. The town's name was changed to Sigmundsburg and a
building boom was underway. In the early 1870's a hotel was built near Sigmundsburg called the Glen Alpine
Springs Hotel. The hotel was supposed to have been the largest wooden structure in North Carolina and may
have had as many as 100 guests at a time. Possibly due to the popularity of the hotel, the town's name was
changed again to Glen Alpine Station around 1883.
"Glen Alpine Station," writes The Morganton Star in its April 3, 1885 issue, "is located on the line of the
W.N.C.R.R., six miles west of Morganton. It has rich territory to draw from, being surrounded with a thriving,
industrious population of farmers who produce yearly large quantities of surplus corn, wheat, tobacco, pork
and beef cattle, with Glen Alpine as their chief trading point. "On our arrival there we found the people all at
work like bees after the first approach of the spring flowers.
"We wound up by calling at Sigmon Bro., where we found the model postmaster, Columbus Sigmon, polite
affable - always ready to look when the question is asked: 'Anything for John Smith … and if there is nothing
for the Smiths is there anything for anybody in my neighborhood.'
"And the strongest proof that these people exhibit bit to show that they are a progressive people is that
they are willing to patronage their county newspaper. In addition to the already large subscription list we
have at that place, we added fifteen new names - all good men - and took some good orders for job work
also for advertising. We predict a bright future for glen Alpine Station."
The Glen Alpine Springs Hotel was closed in the 1890's. The word "Station" was dropped in 1896 and
the town received the name Glen Alpine. 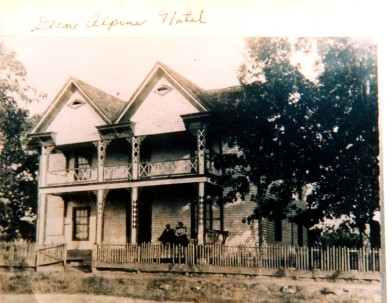 This is the Old Glen Alpine Hotel. It was popular with tourist
and especially since it was across the road from the railroad tracks.
The main mode of transportation when traveling a far distance in those days.
This hotel was closed in the late 1800s.
The hotel was located where the brick Hennessee house is
now located, on the west side of the buildings in Glen Alpine.

Back to Previous Page

Back to GAHS Home Page