When was the Glen Alpine School System started and when was the first building built?
This was the question I asked and we came up with a few answers.

In a pamphlet I have entitled “Sketches of Burke County” by Cordelia Camp (Supervisor of County Schools)
dated 1954, she states that “Robert Logan Patton…...in 1876 began teaching at Table Rock near his old home.
After leaving there he taught at Boonville, The Globe, Amherst, Moravian Falls, Glen Alpine and Morganton.

Email from Clyde Ross which was a graduate of GAHS and was a year or so behind us in school. September 07, 2007

Glen Alpine’s earliest public and subscription schools had terms of two or three months. Citizens of the community
wanted better schools with longer terms, so in 1907 they voted to have a special school district.

From “The Heritage of Burke County, 1981” and published by The Burke County Historical Society has the above
written and researched by Eleanor Butler.

These two above writings of history would match up on the dates and what happened, so I believe it to be true.
The Patton School of Morganton closed when the first public high school was established in Glen Alpine in 1912.
Apparently there was school with some sort of teaching before 1912. We could assume they had school when
teachers were available and the students could attend.
Dewey E. Fox, September 2007 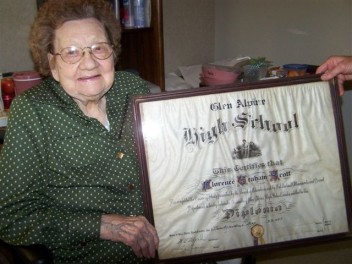 Florence Taylor, mother of Cobb Taylor,
with her 1929 Glen Alpine High School Diploma.
Aunt Florence turned 97 in September of 2007.
So we know that the Glen Alpine School had graduating students in 1929.

Back to Glen Alpine Homepage