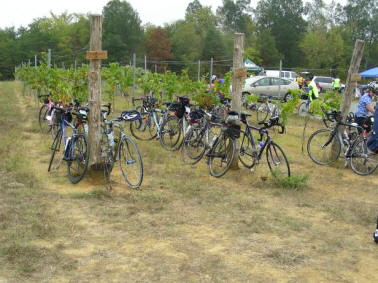 At the Winery, good posts for bike support

As usual, this morning I was awakened by the movement of riders and the zipping of tent zippers. I tell you these
guys get up early and it's to the point that I'm waking up early, of course I go to bed early to rest up for the next day. Seems
every morning I get up a little earlier and leave camp earlier. I had the alarm set for 6:15 A.M. but was up by 5:45 A.M. I
couldn't go back to sleep with all the commotion outside the tent.

The weather was clear and warm this morning at the Louisburg College where we camped for the night.
In addition to the riders, I couldn't believe it, but I heard the sound of whistles in the gym; they were practicing ball
at 5:00 A.M. in the morning. Boy, they are dedicated. By the way if you didn't know, Louisburg College is a two year college.
I don't know what their strong points are, but apparently everyone plays ball of some kind.

I left Louisburg College about 7:30 A.M. this morning. Earlier than I usually take off in the morning. But each
morning I'm getting earlier, maybe by design. I came here to ride, not hang about camp in the mornings. It was a beautiful
fall morning and I wanted to get my riding done early in the cool of the morning. (Yes, about noon it turns hot, even
for October, especially this year.)

This was the first morning that I didn't have to put on extra clothing to keep warm. I only put on my regular
bike riding attire, shorts, short sleeve jersey, and riding gloves. I was like a race horse in the starting gate, ready to go.

Back to the take-off; it was clear and warm, but as we got about one mile into the route we hit a heavy dense
fog. The humidity fogged up and accumulated on my glasses to the point that it was hard to see. I just tried to follow
the bike and their flashing lights up ahead. It was hard to see, but a wonderful morning for riding. About 9:30 A.M. the
fog lifted and the sun came out boiling down on us. But overall it was a wonderful morning to be alive and to have the
opportunity to ride the 65 miles to the next camp.

The rumor in the camp today was that the course was flat, but I found it not to be flat. I would at least call
it gently rolling hills. On Hwy 401 North we had several long climbs early in the route, otherwise it was gentle rolling hills.
They certainly rolled me.

As we do most days, we passed through many small towns and today was no exception. One of them was
at the second rest stop which was in the town of Warrenton which was established in 1779. This town is over 225 years
old according to their sign at the edge of town. Rode by many older large houses in good repair. I would like to thank these
people for keeping these old houses in tact for future generations.

We later in the ride crossed Gaston Lake as we continued to our next destination. With all the dry weather, I
was surprised that the water level was full. I don't know if they had had rain or have better water controls. I understand
that Gaston Lake supplies many areas and towns in North Carolina as well as Virginia. We were just a short distance to
the Virginia state line.

We rolled on toward Roanoke Rapids. I stopped to take many pictures of tobacco fields and the machinery
gathering the tobacco leaf. I also photographed churches and cotton fields. At one stop at a cotton field, there were four
cyclist that stopped to have me take their picture in front of the field of cotton. How does that song go: "In that old
cotton field back home."

Again today, we had a cross wind in our face all day long after the fog lifted. I noticed as we got to the flatter
roads we picked up the wind and it was never at our back. The wind does keep you cooler, but you peddle harder. Also in
the flatlands it's a continuously peddling rhythm.

I'm getting a little long on this one, but we did get to Roanoke Rapids where they had many entertainment
opportunities. One was the Randy Parton Theater which I took advantage of. They had $10. tickets especially for CNC 2007.
Randy Parton is Dolly Parton's brother. He has or the town has a nice 21 million dollar hi-tech facility. The only problem
is that they are having a hard time filling the seats. But Randy does put on a great show. I would recommend it anyone,
but you may have to pay $25 or more for the tickets.

I started riding this morning at 7:30 A.M. and arrived at 1:10 P.M. Having enjoyed the ride and the
entertainment and even the camping. It's been a great day in the state of North Carolina.

The question is; Will I ride the never before ridden Century tomorrow?
Will I make the turn for the Century route? We'll see!