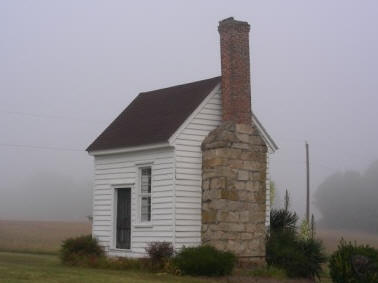 On the way out of town from T. J. Davis Recreation Center Complex I was thinking back at all the nice
recreation and high schools we have in North Carolina. Some of these schools and recreation budgets have got to be in
the high millions. They have football fields, soccer fields, volley ball, basketball, Olympic swimming pools, weight
rooms. You name and they probably have it. Hope these people are taking advantage of the facilities.

Today we will have a choice, to ride the regular 78 mile route or the 100 mile Century. Which will it be?
I have never ridden 100 plus miles in one day. The most I have done to date is 85 miles and that was back in CNC 2005.
The constant riding is starting to take a toll on the body. Remember this is seven days of an average of 70 miles per day
with no break in between. But we love punishment.

Left Roanoke Rapid from the T. J. Davis Recreation Center Complex early, 7:10 A.M. Are you impressed? I was!
After several turns getting out of town we settled in on NC 158 and had our first rest stop at the 17 mile marker. It was set
up at the North Hampton Courthouse. Continuing on we rode NC 305 for a distance and then the next rest stop was at
the 27 mile marker.

I found you don't need to look or listen to the weather conditions while biking on this trip. All you have to do
is listen to the other riders. I guarantee that the weather will be a favorite subject. I don't have my notes in front of me
but I think this was the day we got a shower of rain. The skies began getting cloudy and we were caught in the rain for about
a half-hour. I thought about taking a rain jacket with me this morning, but decided against it since it was warm and a
jacket would just be in the way. So I took my chances and GOT WET.

Railroad tracks are not the bike rider's best friend as several riders will be able to testify to. There were a double
railroad tracks crossing somewhere down the road from North Hampton. The angle of the tracks to the road made it
extremely dangerous when crossing, especially since it had rained and they were wet. When I got to these dangerous tracks
there were a couple of volunteers there asking riders to be careful. As a safety precaution I walked my bike across. The
reason for the concern was that at least two riders had been taken to the hospital for broken bones. When crossing
railroad tracks on your bike, you should cross at a 90° angle, (+). Every year that I have been on the rides there have been
cyclist falling at railroad crossings. So be careful, if unsure, walk your bike across. Safety before Pride.

Rest stop 4 was at Askewville Baptist Church. Somewhere after this rest stop a decision would have to be make
on the Century. You may have guessed it, I turned left on New Road, the Century route. No turning back now. On the route
were probably five miles or more of new paved road or they were paving as we rode by. There was a very fine gravel
coating of rocks on the road. I was concerned about a flat tire, but I was glad I put on a new back tire a few days ago.

As you may see I did ride the Century, but my back and bottom was starting to feel the pain and I had to stop
several times to help and rest the body.

I thanked God when riding into the John A. Holmes High School. Tired, hot, but with a feeling of the accomplishment
of completing my first Century.