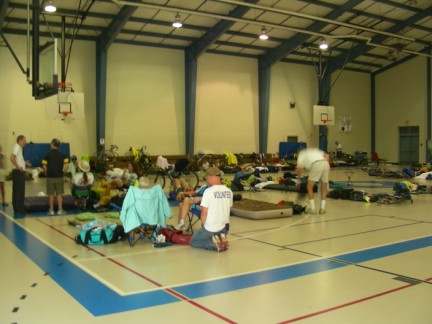 Today's ride is going to be one of the longer days on the trip, 73.8 miles according to the queue sheet of CNC and according to CNC
it may be the toughest one day ride ever of CNC. I certainly didn't want anything harder then yesterday. Which I would say it will be the
hardest day of the trip, at least I'm hoping so. Today is 20 miles longer then yesterday and it still had many hills and climbs.

We left Elkin Municipal Park by the back way and they had police monitoring the busy intersections, which made it nice for
the riders.

We had four rest stops today, one each at the 10, 25, 41 and 52 mile markers and I needed all of them. These rest stops are a
good reminder that we need to drink more water while cycling. I have a tendency to think that I'm not thirsty. The rest stops are
equipped with port-a-johns for the necessaries of the road. They also furnish water, gator aid, apples, bananas and some a peanut
butter and jelly sandwich.  Anyway they are good rest areas, so take advantage of them.

Most of the trip was uneventful except for the wear and tear on my body. It was a long hard ride, but the accomplishment of riding
into Bur-Mil Park was a good feeling. But, there was one event that does come to mind (not much left.) There was an accident at one of the intersections somewhere about the middle of the ride. The account I heard was that one rider was so excited and interacting with some school kids that had come out to watch that he ran a red light and a car hit him. The good news is that he was checked out at the hospital and was okay, but his bike was completely destroyed. He was a Blessed rider. I rode by after they had taken him to the hospital, but I viewed the bike on the road. So folks be careful, the bike and you will probably get the worst end of the deal when you collide with another vehicle. It's a no win situation for the cyclist!

I rolled into the Bur-Mil Park on there greenway. The Lake Brandt Greenway Trail was the last of the ride for the day. The last
two and 1/2 miles was the greenway. I put up my tent, took the shuttle to dinner and returned for a good night's sleep.