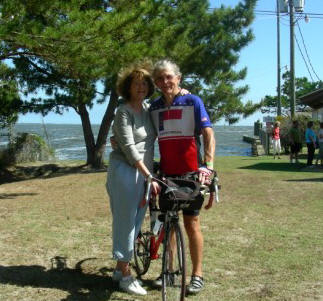 Dewey and Martha Fox at Finish

"A Journey Ends With the Last Revolution of the Peddle"

We are going home today, our destination of one week of riding and hope to finish at Currituck, N. C. Rode by the
the John A Holmes High School yards and followed a couple of other cyclist. Then a couple cyclist in front of me turned to
the left and a couple rode straight ahead. I was confused, but I followed the riders in front of me and discovered that we
had missed the turn and the other riders were going for breakfast in a difference direction. After five or six blocks we got
back on the correct route.

It was going to be a good day, going home and the accomplishment of seven days of cycling. Also I was starting
to get a little lonely and I was missing my wife Martha. She is to meet me at the finish line in Currituck. She drove down from
Morganton, and we are to have a nice dinner and stay the night somewhere on the beach. We celebrated our twenty-fifth
wedding anniversary this year.

Our first rest stop was in Hertford at the Hertford Courthouse in Perquimans County, N. C. The original old
courthouse was established in 1732, over 275 years ago, a lot of history here. The current courthouse building was
established in 1825, still standing in the middle of town. The town had a life long resident there, helping anyone with
the history of the town and county, or any other questions.

You may or may not know that Hertford was the town that Jim "Catfish" Hunter was born and raised. The
gentleman helping us with the history knew "Catfish" personally. James "Catfish" Hunter was a great pitcher growing
up and signed with the Kansas City team by owner Charles O. Finley. Charles O. Finley gave Jim the name
"Catfish" and it stayed with him the rest of his life. "Catfish" is in the North Carolina Sports hall of Fame in Raleigh, N. C.
and National Baseball Hall of Fame in Cooperstown, New York.

Hunter was the highest paid pitcher in baseball when he signed with the Yankees in 1975. After many years in
baseball, the arm strain and effects of diabetes had begun to tell on the pitcher and in 1979 at the age of 33 he retired from
baseball. He returned to his roots, close to Hertford where he grew up and where he owned a small farm. He was diagnosed with
Lou Gehrig's Disease and died of complications from the disease on September 09, 1999, at the age of 53.

I hit the last rest stop at the 44 mile marker, right off of NC17. Looked forward to the remaining 25 miles
and into Currituck. Started getting a few saddle sores and had to stop a few time to treat them. As well as my back was
giving me some problems, especially after 35 hours this week on the bike. (Where is my chiropractor?)

Anyway after all this, I arrived at the road to the finish line. The road was lined with flags, and a large sign
on at the entrance saying, "Welcome Mountain to the Coast Cyclist," Welcome to Currituck County." What a relief
and a feeling of accomplishment to ride the 492 miles from West Jefferson to Currituck.

I quickly had my picture made at the "Grace Diggers" truck, which was at the finish line. Currituck is
home to the most popular monster truck. Headed off to find my wife a few feet away. Made a few pictures at the
Currituck ferry, which goes over to Knotts Island.