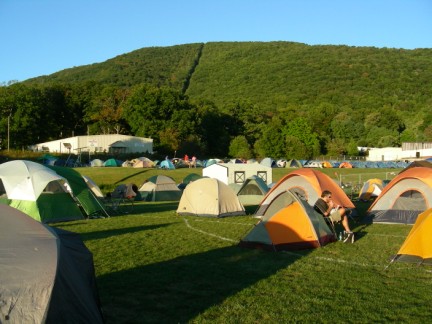 "A Journey Begins With the First Revolution of the Peddle"

Woke up this morning early; riders were moving around, talking, zipping tents and taking down their tents
and equipment. This was earlier then I wanted to get up, I was figuring about 7:00 A.M. But they had other ideals.
After all it doesn't get day light till about seven.

It was hard to get out of my warm sleeping bag. It was a cold night and I woke several times due to getting cold.
I had to zip the sleeping bag over my head to stay warm. To my surprise when I came out of the tent, it was covered by
ice. It hadn't rained, but the dew had frozen on the tent. My bicycle temperature gauge registered 38 degrees, but it may have
been colder. As the saying goes, "It was a big frost on the pumpkins."

Since it was so cold, I layered my clothes. I put on my long riding pants as well as another pair of riding shorts.
I put on a T-shirt, riding jersey with long sleeves, sweat shirt and GORE-TEX®  wind/rain jacket. I wear warmers over my shoes,
full finger winter gloves as well as a skull cap under my helmet. I was set up to go into the cold of the morning in
West Jefferson. It was strange seeing all the riders bundled up in their warmest gear.

I rolled out of the Ash County High School parking lot at 8:15 A.M. and it was cold, especially riding those down
hillers. The scenery was beautiful; "There was frost in some of the parts of the mountain, as well as numerous spider webs on fences
due to the heavy dew." I can remember one scene, especially. It was a pasture with an old bob-wire fence, the fog was rising with
the sun and there were dozens of spider webs around and on the fence. It was beautiful, probably could not have been captured on
film. It was to be enjoyed for this "moment in time."

The 55 miles today was high-lighted by a six mile downhill descend after we left the Parkway area. Of course it was
followed up by one of the hardest climbs we had for the day. As you riders know, a down hill is usually followed by a climb,
there's no free lunch. There were three or four strong climbs for the day. We were in the mountains all day. On one climb, my heart
beat got up to 130, so I stopped to let it get back to 100 or less. I don't like it to go over my max. See post words under 4.

My legs were getting a little rubbery since 55 miles was the most I had ridden in one day this year. See Pre Pre Ride on health.
I was glad to see the Elkin Municipal Park. By now the temperature was a pleasant 70 degrees and I had taken off most
of the outer clothing.

I set up my tent close to the small creek that runs through the park. Believe it or not, my tent still had ice on it. I laid
the tent out in the sun to dry out before setting up. After setting up the tent and putting all my possessions in, I rode the
shuttle to Jonesville to eat dinner at a fish house. Returned back to camp feeling a lot better and fuller for sure. I prepared my
bike for tomorrow by airing up the tires and filling the water bottles so I could get a early start in the morning. It will be to
Bur-Mil Park in Greensboro which will be approximately 75 miles away. Ready for that second day.

Oh yes, they had music tonight as well as a wine tasting and the selling of drinks and dinner.